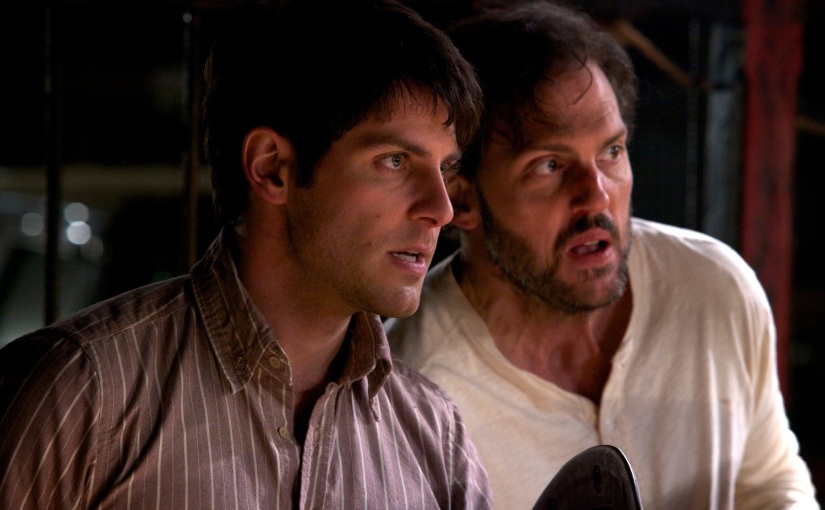 At the start, I was prepared for Grimm and I to go steady, appointment television style. Fringe was ending. And I have a weakness for almost goofily supernatural fiction that would need sating…

But it never quite happened for us. I have a more grudging relationship with the series, often streaming it on demand on nights I can’t find something else, a sci-fi booty call –the kind of compromise that acknowledges that the show is attractive and yet has failed to inspire any commitment.

Which brings me to a kind of soul-searching proposition as season 2 resumes. After watching last week’s return from hiatus (yes, on demand again) and with tomorrow night’s episode approaching, I ask myself, “Can I just let go of what Grimm isn’t and embrace the rest of season 2 for what Grimm is? Is it time to forgive the show for a past full of sci-fi/fantasy sins? “

For those who lead lives outside geekdom, here’s my attempt at naming some of the unwritten laws that Grimm has trampled in the past:

This is to say nothing of the hard to follow conspiracy back-story about royal families, their bastard sons, their mercenaries, and their relationship to Grimms. At this point I suspect that this long-format plot feels so loosey-goosey because it is, because the writers are not yet committed to how the pieces of their two-season-long narrative puzzle go together. (This is really really not Ronald Moore’s Battlestar.)

The question of whether these sins can been overlooked is really one that’s been before me all along. This thing was never up to sci-fi snuff but it has also never been dull.

So as I confront these shortcomings, I must also confront that I keep coming back. Maybe Grimm, it’s not you; it’s me. Maybe I want too much–more than you can give–and it’s only my own expectations keeping this relationship from taking off.

Taken on its own terms the show is still consistently having fun with its Grimm’s-Fairytales-come-to-life premise. The notion of giving Nick (David Ginuntoli) two partners–one fellow detective for his job as a cop, one fairytale creature for his destiny as a Grimm–has developed solidly and without feeling forced. And the writers seem to know that Silas Weir Mitchell–playing supernatral wingman to Nick as the show’s vegetarian werewolf–is the most charming character and the most watchable performer. The jury is out on whether the plotline for Sasha Roiz‘s mysterious, morally ambiguous Captain Renard will come together but, in the meantime, Roiz is winning my fandom, making hay (or in this context, spinning hay into gold) with his screen time.

And so, I resolve to give this thing we’ve got going some space to grow. I’ll try to let Grimm off the hook for not being the show I once believed it could be. But a girl has to maintain some standards… Fingers-crossed that the plot tightens up enough for the two of us to still be friends.