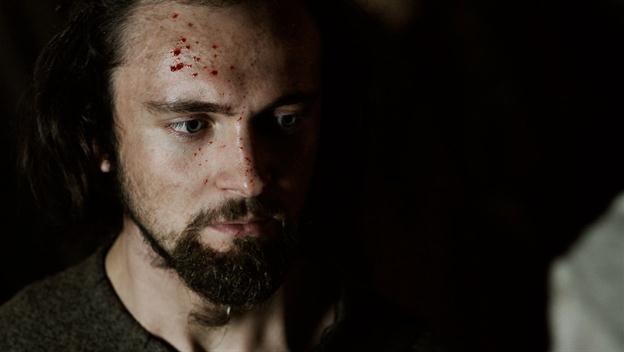 Two things are official:  I am hooked on Vikings.  And, the preview for next week has me concerned.

I’ll grant you it is unlikely in cast of death-defying fighters, savvy politicos, and their compellingly complicated women, that Athelstan (did you even know his name?) is anyone’s favorite character.   But as a device for smoothing the viewers’ entry into Viking culture, he has been more useful than a Berlitz course in Old Norse, an unobtrusive tool for getting us the information we need to translate our main characters’ and their culture.

Brought to live among the Vikings against his will, Athelstan (George Blagden) has afforded the show a perfect character through which to mirror the audience’s sometimes hand-in-hand revulsion from and fascination with Viking custom.  For example, fascination with the slaughtering of a slave woman to accompany the dead Earl to Valhalla is sated by the camera’s unflinching gaze, even as our revulsion at the practice is also validated by the monk who does not want to watch.  When the Vikings seem too foreign to be easily relatable, the priest shows up and offers us company–a fellow pair of outsider’s eyes  and a voice for our qualms but situated within the narrative rather than beside us on the couch.

The Anglo-Saxon outsider has also proven useful for asking the questions that help us learn the backstory of our characters and their customs.  It would be implausibly chatty for a Viking to wax reflective on the intricacies of Viking slave holding, sexual ethics, death rites, or religion, but with the priest in tow, these needed details flow as natural conversation.

He is also the embodiment of Ragnar’s (Travis Fimmel) savvy.  The choice to spare this monk and make him part of the Lothbrook household signaled Ragnar’s ability to play the long game.  Realizing that the monk spoke their language, Ragnar brings the foreigner home as a slave as means to interviewing him about North Umbria and its inhabitants’ ways, crucial intelligence that will affect strategy for future raids.

Moments close to the personal character of our protagonists–revelations of their intellect, their intimacy, their mercy, their hardness–have been linked to Athelstan’s perspective—a way of underscoring that these people may not be who we (both us and the priest  may expect them to be.  They can be more coarse and more kind, more careful and more lethal.

Maybe it’s time for the priest to meet their makers because his work is now done.  Like him, viewers are reasonably acculturated, less likely to wince, better able to follow, more comfortable with the spectacles of Viking difference than we once were.   Still, I’ll miss sharing his point of view.