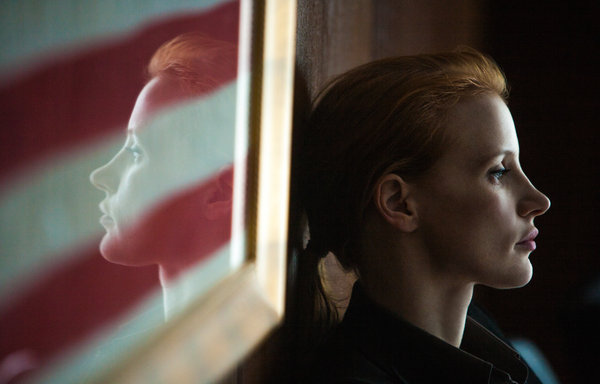 So much of the Zero Dark Thirty conversation has been about whether it presents torture as effective in gaining intelligence. For me most of the interesting questions are about how–how visually, how in filmic language–Bigelow’s film presents torture.

I’m not saying that there aren’t worthy arguments to be made about the film’s politics.  But, in my view, any discussion of its politics that doesn’t take its filmcraft seriously will be sorely lacking.

The opening of the film is unrelentingly tense, an immediate plunge into the national memory of confusion and tragedy of September 11, 2001.  With nothing to look at (literally a black screen), we instead hear the jumble, the confused bits of air traffic control, first responders, reporters, terrified Americans –none particularly clear or complete.  No visuals anchor these sounds with the certainty of what is going on.  We are literally in the dark as a national crisis unfolds.   But far from leaving us with this abstract sense of panic, Bigelow then quiets most of the din and one voice emerges, one voice of one woman in the World Trade Center.  One woman telling the 911 operator that she believes she is going to die.  In a matter of minutes and with nothing to see, the film has already evoked emotions wrapped up with both the national and deeply personal proportions of the terrorist attacks.  This emotional primer helps ground us in the mentality, in the urgency that has fueled political justifications of our own dogged pursuit of the war on terror.

From that unconventional and unsettling opener, viewers are immediately taken into a room where CIA operatives torture a detainee for information.  We join Maya, our main character, there as it is both her first time through such an interrogation and ours.

And then we all have to sit through it.

Much has been made of whether or not Maya looks away, her non-verbally expressed level of acceptance treated as a kind of proof of the film’s stance on torture.  I’m personally interested in whether or not we, the audience right there in the multiplex, look away.

If we do keep our eyes on the screen, do we find ourselves able to stay fixed on the “action”  of the terrible deprivations and injuries inflicted on this detainee? Or do we look away even within the frame, searching Maya’s face instead, searching her reaction as a way to understand our own?    Do we feel permission for our own discomfort when we see hers? Our own mettle when we see hers?  Are any of us, regardless of our political orientation, really unflinchingly okay with this?  Do we register our own complicity in this process as we register Maya’s, as we watch her give assistance to the interrogator even when she does not seem altogether at ease with the torture?

Whatever else it does, Zero Dark Thirty makes us sit in a room with a man being tortured for probably thirty minutes.  We are literally occupying the proverbial front row seat.  We must face it or find that we can not face it.  Whatever stance we take on torture, we can not take it abstracted from this emotionally and visually riveting scene.  A scene that takes up too large a proportion of the film, too much of our way into the film’s universe to shake off easily.   Bigelow’s film relentlessly presents us with the cost of information extracted through this sort of extreme duress.   A cost borne most palpably by the tortured but which also impacts the torturer.  This carefully orchestrated opening aims, in my view, to count the moral cost, to count the cost to the humanity that this approach requires of the interrogator and of the people who sent him there.   It aims to cost us our illusions.

Zero Dark Thirty serves up the challenge to be able to look torture in the eye no matter your point of view.