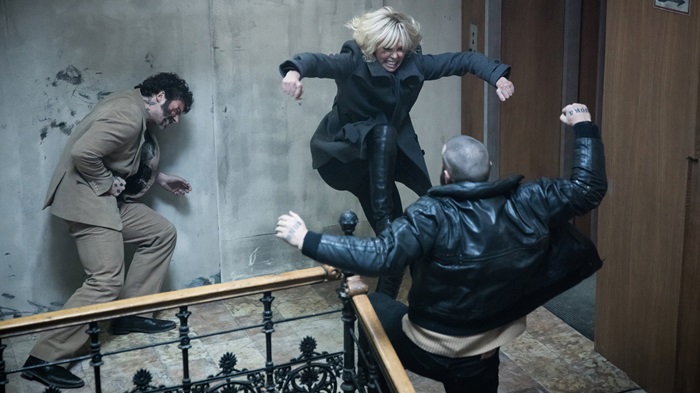 I’ve been Terrible about keeping blog followers in sync with my few essays from the summer.  Pardons begged for old news if you caught this on Christianity Today last month but also if you didn’t get word of it until now.  Thanks for following!

After seeing the new spy thriller, I still don’t know what a female action hero looks like

Many moviegoers turn to the absurdities of comedy or the happy endings of romance when looking for an escape. I’m more of a guns and explosions kind of girl, so I’d been looking forward to Atomic Blonde, the Cold War espionage thriller starring Charlize Theron as MI6 operative Lorraine Broughton.

Atomic Blonde is a highly stylized, spy-versus-spy picture based on a graphic novel. Though shot in color, the film relies on a restrained color palette and boasts carefully blocked frames and noir-inspired lighting. Set in the divided Berlin of 1989, the film also draws on an array of ’80s references, from shoulder-exposing sweatshirts and stiletto ankle boots to a soundtrack so full of beloved ’80s hits that licensing them all ranks as one of the film’s most impressive stunts.

As if in tribute to the Soviet enemies of the Cold War, the film’s plot has taken the form of so many Russian nesting dolls: Each new layer of the tale opens up to reveal another hidden inside. The crisis that sends Agent Broughton to Berlin involves a murdered MI6 agent and a missing list of all the undercover intelligence operatives in the city. Both East and West are willing to kill for the list (and do), as it poses both a security threat to their operations and an opportunity to gain the upper hand.

The list is also believed to reveal the identity of a Soviet double agent who has infiltrated MI6. While the Brits know codename “Satchel” exists, they’ve been unable to find and eliminate the traitor. In addition to the female lead, the characters involved in untangling the plot include Broughton’s fellow British spy, David Percival (played as a charming maniac by James McAvoy), a handful of East German, West German, and Russian spies that become hard to keep straight, and the CIA (embodied by John Goodman).

The cageyness and cunning of spy films is part of their fun, but this film’s number of betrayals stacks up almost as fast as its body count. After one last clever reveal that comes in the final scene, viewers get the answers to all of the story’s riddles, save one: Why should I root for Lorraine Broughton? …