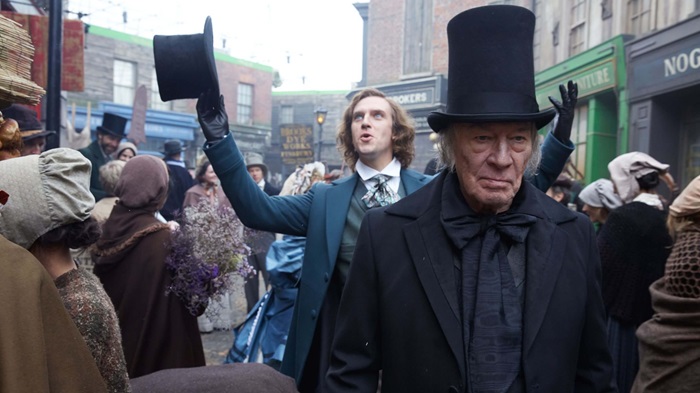 In the winter of 1843, the author struck on the idea of a Christmas ghost story that would be released in time for the holiday. However, his late-fall moment of inspiration left him almost no time to get his book to press—only half a dozen weeks for the story to take shape, for an illustrator to supply drawings, and for the printers to supply them to stores.

The Man Who Invented Christmas is the story of those six weeks of breakneck creativity during which Dickens wrote perhaps his most beloved work. The movie is a thoroughly pleasant, sometimes funny, and occasionally reflective story with a PG-rating and storybook aesthetic that recommend it as the go-to family film of this holiday season.

Dan Stevens—once a star of Downton Abbey—delivers an eccentric, anxious, animated young Dickens to the screen. He gets incredible mileage out of his expressive blue eyes and conveys Dickens’s writerly flights of inspiration with a near crackling energy. Better still, Stevens’s Dickens finds an equally entertaining foil in Christopher Plummer’s Scrooge. Something peculiarly pleasing occurs the first time Plummer appears, equipped with top hat and cane, shuffling through a London cemetery. I felt as though I’d unwittingly been waiting for a long time to see him in this role, so much so that his first “Bah. Humbug!” evoked a satisfied sigh of “at last!”

Much of the fun in this film hinges on similar moments of recognition as the story weaves familiar details from A Christmas Carol—names, events, phrases—into ordinary moments of Dickens’s life. For example, the movie proposes that he collected interesting names of day-to-day acquaintances in a notebook, building a list for his christening of fictional characters. Dickens explains that only after he’s chosen just the right name will that character appear. Rather than leave that description as a mere figure of speech, the film plumbs it: Dickens’s creative process is externalized with characters that actually appear once they’re rightly named, make themselves available for conversation, and as his deadline draws near, harass him to return to work.

In the exchanges between Dickens and Scrooge, The Man Who Invented Christmas brings to life a creative process at once whimsical, mercurial, and manic. A growing cast of characters from A Christmas Carol breaks into the mindscape of Dickens like so many waking dreams. These scenes have a distinct aesthetic and moral sensibility; the world of the famed author’s fiction is at once more colorful and more severe than the flesh-and-blood London that he occupies. As Dickens takes measure of his protagonist’s life, Scrooge is prompted by each ghost to reflect on his attitudes and actions. Persistent appearances by Plummer’s Scrooge—even when the novella isn’t being penned—suggest that Dickens’s conscience, too, is being haunted just as he imagines Scrooge’s to be.

As many readers will recall, A Christmas Carol addresses themes of loneliness and friendship, self-interest and generosity. Visitations from the “ghosts of Christmas past” make stark the relational and moral poverty of Scrooge’s wealthy life. Rather than reveal a single grave sin or Gothic secret to explain the hardness of Ebenezer Scrooge’s heart, Dickens’s novella imagines a kind of cardiac sclerosis setting in over the course of his character’s decisions, actions, and inactions. For both Scrooge and Tiny Tim, the consequences of Scrooge’s selfishness are spelled out clearly, the stakes as high as life and death.

As the film shows elements from this story breaking into Dickens’s biography, it highlights moments of moral consequence. These novelistic interruptions give us signposts for how ordinary life—though less dramatic—is also a working out of convictions and values, of bitterness and sins that accumulate and shape our character.

Dickens redeems Scrooge by having him recognize and repent of his habitual selfishness. The screenwriters redeem Dickens using much the same strategy …

These shots of two of Westworld’s central characters waking up help visually underscore the narrative parallels of these two characters. As stereotypes of women they represent the Westworld poles of the madonna/whore dichotomy. Both are attractive to a number of the park’s visitors, though one for her romantic innocence as much as the other for her worldly knowing.

The similar shots of waking also provide us reminders that Westworld is a story in no small part about androids waking up to their circumstances as objects designed for entertainment that are also frequently objects of desire, sex, and violence.

The theme of awakening to the true structure of their reality is also echoed in the script followed by employees performing diagnostic interviews with “hosts” in the corporate laboratory.  In this set-piece, the host in question (often Dolores) answers the question, “Do you know where you are?” with, “Yes, I am in a dream.”

Thus the movement between the real world as dream and the “awake” world of the Westworld theme park takes on irony and existential weight for main characters Dolores and Maeve.

Viewers can expect that as these women awaken to their circumstances, something in the narrative world will change. 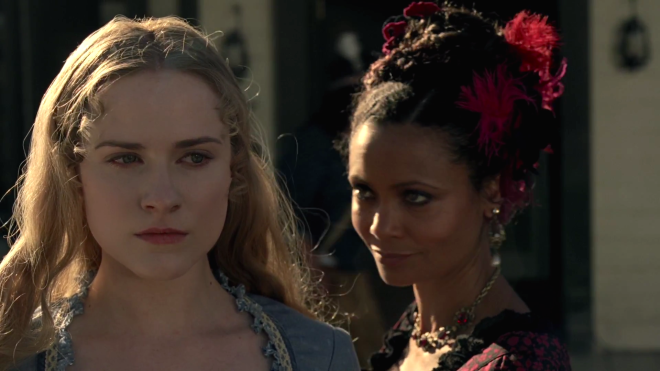 And that expectation feels like a pop cultural legacy of Second Wave feminism to me.   END_OF_DOCUMENT_TOKEN_TO_BE_REPLACED

Revealing a key event of the season’s ending during the first episode was a risk that wagered heavily on the pilot stoking viewers’ initial curiosity and establishing empathy with its characters  Several intense images and sounds of the Rayburn brothers struggling against the elements–the swampy morass of the mangroves and the choppy surf of the Gulf during a pounding rainstorm–with one of them apparently passed out or dead gave us a glimpse of a high-stakes “what” without any of the “how” or “why.” The tactic would act either as provocative inducement to keep on watching or as eye-roll-inducing gimmick that even the near-immediate goodwill produced by seeing Kyle Chandler on the small screen could not sustain. END_OF_DOCUMENT_TOKEN_TO_BE_REPLACED